Game Management: How to manage upgrades?

As anyone who has read my articles knows, I'm a diehard rusher.  I firmly believe that rushing strategically is hands down the best way to play this game.  I might max the lower levels, but after TH7 I move quickly up the stack.

I've discussed a bit of my strategy behind rushing in previous posts, but I've never really gone into detail on how I actually keep track of what I'm doing.  Rusher or maxer, if you want to really track your game's progress, you need to get out of the game and into a spreadsheet or something similar.  SuperCell has taken a step forward in providing suggested updates under the builder icon at the top of the game screen, but it only shows the next lowest 5 upgrades and that's not enough when there are upwards of 32 categories of upgrades (not including troops) comprised 122 structures and 300 walls.

To manage my upgrades on my more complex games, I use a spreadsheet that lists the item, quantity, current level, next level, max for the TH level I'm on, how much it costs to do the upgrade, and how long it will take me to complete the upgrade.  I use sorting orders that suit my needs at the particular time, and for rushed games I even include the max for each TH level below the one I'm at.  This gives me a quick, bird's-eye view of my entire game so I can plan my upgrades accordingly.

Case in point: my TH11 game, Kuss Von Nacht.  This game went from a new TH7 straight up to a TH11 overnight.  Yup - I gemmed the TH upgrades so I could play with the new toys back in January.  This was a premie game but, unlike some others, I have enough experience to recover from a premie to a standard rush and make the most of it.  In roughly 10 months, I've maxed all of the offensive and resource structures (except DE drills; just never got to them) as well as several defensive structures.  Here's the spreadsheet view for this game:

Everything that is already maxed out has been moved to the bottom to get out of my immediate view.  Simply put - there's nothing else for me to do with these structures.  My current goal is to get everything up to the equivalent of a maxed TH9 (except walls).  Of those structures remaining, most are either there or getting real close.

This also shows my upgrade strategy for this game.  Upgrade strategies will change depending upon the focus of a particular game.  In this case, I've been focused on recovering the game to a rushed TH11 (TH11 offense with TH9 defense).  Heroes, traps, and walls represent a lower priority than other defensive structures.  Splash damage capable defenses have been given a higher priority over most point defenses because they're more intimidating to raiders.  Likewise, my base's core defenses have been given higher priority both because they're needed to protect DE and because they're intimidating (infernos are maxed for TH11, for example).

I track the same on my troop upgrades but, unlike the game structures, troop upgrades are manageable simply by using the in-game profile.  The profile for Kuss Von Nacht looks like this....

Again, the upgrade strategy is fairly apparent - I always focus first on my farming troops, which consist of barbarians, archers, giants, wallbreakers, wizards, and healers.  (These were all maxed up until the update last week that gave us a new level of wizard and dragon.)  Next up will be some key war and CC troops.  This particular game is a CC feeder, so first up were the stronger CC troops - dragons, miners, witches, valkyries, and bowlers.  (Dragons are upgrading to level 6 right now.)  On my other games, the focus is similar but golems, lavahounds, and hog riders are much further along.  (Remember: this may be a TH11 but it essentially premie'd from a max TH6.)

In addition to these, I also have a "shield base" as I call it that I use on each game to get the quick view of the structures, what I have currently upgrading, and even what I want to upgrade next.  The far left column of this base has things that are coming up in the upgrade rotation.  The order of the items on the base (top to bottom, left to right) correspond to the default sort order in my spreadsheet.  Of course, I only use this base when I'm actually under a shield (often while boosting collectors) or while raiding with free builders who can clean it up should an obstacle appear before I reset to my regular village base. 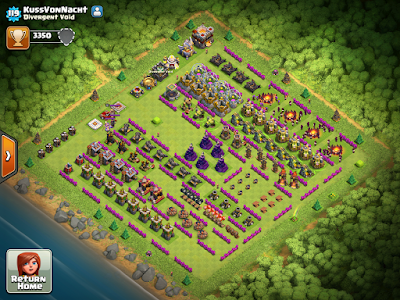 In this particular version, you can see that the air sweepers are next in line to be upgraded and the archer towers come after them.  That's consistent with my planning spreadsheet.  I'm under a few days of shield and boosting collectors to get a little more resources for the air sweeper upgrades.

What's next for this game?  Well...once it reaches TH9 maxed level for remaining structures, I will shift gears to working on walls to level 8 and maxing the heroes.  And before anyone cries foul - although rushed, this game always pulls in an equivalent or stronger TH11 opponent in clan wars.  This is probably the biggest difference between strategic rushing and what is commonly referred to on the forums as "engineering".  While engineered games run a very tight upgrade path designed to minimize overall war weight, a strategically rushed game is designed to get to the end-game as quickly and efficiently as possible.

I don't typically use my spreadsheet until TH9 and up; the lower town halls can be managed relatively easily with just the shield base system I mention above.  Once I move to the spreadsheet, though...things get kicked into high gear and become a lot more fun!