I'd forgotten how little you get when first starting a game of Clash of Clans; the Builder's Base is no different.

The game begins with one barracks, one army camp, one cannon, a couple of walls, and your first gold mine/elixir collector.  The reality is that there's not a whole lot you can do with so little and this is by design.  On the plus side - you'll get SIX loot generating attacks, so you can at least wrap a maxed BH2 at the end.

Your first run of attacks will be a bit rough.  You have 4, level 2 Barbarians in just a single camp; that's not a lot to work with.  Of course, your opponents will typically have no more than a single cannon for you to contend with so if you're a bit smart about it, you can always get 100% and just wait for the opponent who drops his troops in the wrong place.

The very first thing you'll want to change about your base is to close the gap between the walls.  This will prevent enemy troops from simply making a run at your only point defense (the cannon).  Instead, they'll have to go around the walls to get the cannon and that means they will first have to contend with another structure.  Early players will be thrown by this and achieve less than 100% destruction; they'll often get 25% or less.

At first, don't buy anything; just keep attacking and building some trophies.  Since you don't lose resources in this game, you really have nothing to lose.  After you win a few, go ahead and buy your second army camp, some walls, and the push trap.  Add these so your base looks something like this.... 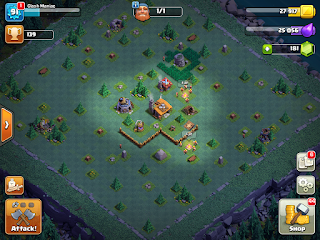 This is a very simple design, one that I won't use for very long, but it is effective for the first several hundred trophies.  Most players at this level will also only have Barbarians, likely just level 2.  They won't be able to break through the walls, so they will have to go around.  If they come in on the right, their troops will be thrown clear to the left and end up going up around toward the elixir collector (at which point they will be picked off by the cannon).  If they start that way...well, you get the idea.

Using this base and my now 8, measly Barbarians, I took my game all the way up to nearly 600 trophies.  Most of your first battles will be draws; you really are just looking for bad attackers right now.  That said...there are a lot of bad attackers out there, especially at this level at the present.

Your best bet - play this while watching a TV show or movie.  I decided to start a binge of Doctor Who, season 8, myself.  Capaldi is growing on me a bit, but I'm only three episodes in and still waiting for the writers to find their threads.  Multitasking during this time is really a sanity check too - once you get higher in the trophies, you'll get lots and lots of clouds; the search for an opponent actually timed out on me several times.  Just keep plugging away.

Worthy of note - I did no upgrades, didn't purchase anything else from the in-game shop...I just went with the one cannon, two camps, and Barbarians.  After a bit, I managed to pop 600 trophies.  My next few attacks were losses, dropping me back down to 544, so I decided to call it quits.  I played maybe two hours or so; it was three shows I'd watched.

At that point - I simply bought everything in the shop, upgraded everything on the game grid, and ran upgrades on the Barbarian and Sneaky Archer.  I closed out my session by pulling the pin on the BH2->BH3 upgrade and taking Sneaky Archers to level 4.  Since I've already run all attacks that can generate loot, I'll let it be until tomorrow and work on BH3 then.  By trophy pushing for a little bit, I'll get a better bonus on my lootable attacks tomorrow as well.