Additionally, you'll need to clear some debris from the game grid to be able to build a decent base.  Needless to say - this is NOT a one day game without using gems.

Prioritization is key to making it through the next couple of days.

Day 2's priorities center in on resources - making them and storing them.  As it stands now, I can only store 100,000 Gold/Elixir and I need to get the Crusher and Army Camp as soon as possible.  Of course...that doesn't do much for you if you can't win the PvP campaigns to get the resources in the first place.

My first few attacks were rough; I was going against BH3 players who already had well developed games.  The first attack was actually against a seriously rushed BH4 player!  After a humiliating defeat, I decided to get a little more defense into place so I wouldn't just get bowled over by every attacker.

I cleared space on the game grid so I could actually build a base.  This was painful; it took several thousand in resources I'd generated overnight.  I also needed the walls to be able to stop attackers, so I had to cough up a few gems I'd been saving.  A penny for a pound; I bought 50,000 gold and bought the traps and walls both.  (It costs more to buy a soda pop at the grocery store.)  A new base design with a few tricks and I was good to go. 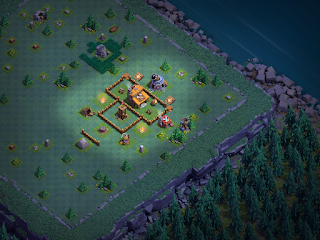 This was just what the doctor ordered; the next round I won with a 73% 2-star to a 37% no-star.  It still took me a few attacks to get my 3 wins, but after 15 minutes of playing (and working on this blog entry) I had the 105,000 in resources.  It seems like most of the attacks at this level tend to be zero stars won, so if you can find a way to win at least one star, you're in a better place; two is even stronger.  Of course, it all depends on the offensive capabilities of your opponent - I was three starred more than once.

Given the 100,000 in resources, I started running upgrades.  Once again, these are not single minute upgrades so it was a lot of "set it up, walk away, come back later".  First were the storages, then the Star Laboratory, followed by the Barracks to get Giants and upgrade them to level 2 real quick.  Last but not least, I had enough gold to drop one more defense and that's a no brainer - the Hidden Tesla upsets a LOT of attacks, so down it went.  Turned out I had just enough left over to pick up the Firecrackers air defense, so I went ahead and dropped that as well.

A new base layout, and we're ready for tomorrow.... 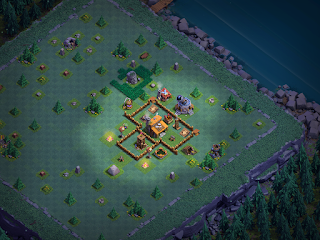 Day 3's goals - upgrade the storages and see if I can't buy the Crusher before it's all said and done.  Catch y'all tomorrow!