Builder's Base - BH5 Base Designs

Anyone who has played BH5 in the 2400 trophy range has seen a base that is heavily used.  it's in the shape of a diamond and, when properly deployed, does quite a number against Baby Dragon or Beta Minion attacks.  I created a version of this of my own that I'm currently using on my own BH5 games. 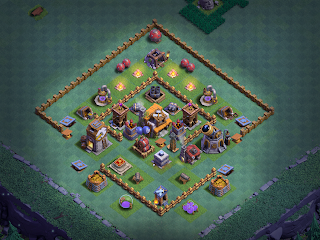 The original design of this base - at least the one I see floating about the most - has the Air Bombs in the lower apex of the base.  The problem with this is that it exposes the Air Bombs to attack by Sneaky Archers and other troops.  A successful air defense uses the Air Bombs and Firecrackers; at BH5, you need to be able to defend against 12 Baby Dragons or 32 Beta Minions; that's not going to happen if Air Bombs can easily be taken down.

So...I moved them up toward the middle of the base.  To reach them, or the Firecrackers, you have to go through a bunch of other defenses and junk buildings.  I've also seen ground attacks start at the bottom, so it made sense to put the Guard Post down there.

The top apron prevents easy access to junk buildings that will be the goal of ground troops, while bringing air troops into range of defenses.Trap placement reflects typical attacker deployment.

Using level 10 Baby Dragons and this base, I soared from 2200 trophies to 2939 trophies in just an hour or two of attacks.  Nearly every single attack was a win.  The moment I hit above 2900, though, I started to come against other players who were familiar with this base and could get higher percentages with ground troops.  They also tended to have much stronger air defenses (a must for BH5).  The base is still very effective in maintaining a trophy base of 2700-2900 which offers 360K to 370K in win bonuses each day; plenty to keep my Master Builder and Star Laboratory active.

When I first rushed my main game to BH5, I ran with a two part, rectangular base that also performed very well. 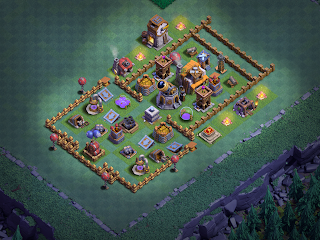 This base relies heavily on routing and a bit of subterfuge.  It served me well when I was hanging down around 2000-2200 trophies at BH5, just shortly after moving over from BH4.  (I believe I used it at the beginning of BH5 to propel myself up from the 1500s.)  It's not an original; I saw a version of it in one of my attacks and adapted it for my own use.

Attacks against this base typically come from the far right or left.  For some reason, air attacks tend to come from the left and ground attacks from the right.  Ground attacks will usually start with Bombers taking out the no-man's land followed by Giants and Archers or Barbarians moving in from there.

Most attackers get half the base.  Since the typical, early BH5 player is rushed and does not have strong troops, they often do not get the Builder's Hall at all.  Those that do will usually end up with a low percentage one-star win.

By the time I hit 2200-2300 trophies, this base design was no longer viable.  Most BH5 attackers had upgraded their ground troops and were easily achieving two star wins in the 60%-80% range by coming at the base from the far right.  Ground attacks from the left never did well as the left half of the base is a ground attacker's nightmare with the push traps, double cannons, and Crusher all placed to break any ground pathing.

As always, YMMV.  These base designs have served me well on a couple of my games now and I anticipate continuing to use them across all seven of the games I currently have running.  Eventually, I'll design a new one but probably not until I move up in trophies again.