This weekend, I posted links and information on the 7 games where I'm currently playing the Builder Base, including how to see them online.  I also posted an article with the most recent base designs I have up - 3 BH5, 3 BH4, and 2 BH3.

Much of my time this last week has been spent tinkering with base designs.  Although the offensive play is what wins the trophies/loot, a solid base design that keeps most opponents to under 50% is very helpful.  The thing that's unique about this game is that there are a LOT of bad attackers...or at least players who have bad luck at any given time.  (Happens to all of us...I know that all too well!)

I've taken the collective trophy range of my BB games to 623-3006.  There's no doubt that the ranges are starting to settle in a bit, with certain BH levels carrying certain trophy ranges.  The introduction of BH6 is causing the upper trophy ranges to reset; as players rush their games to BH6, I'm seeing them as low as 2200ish trophies.  That won't last very long though; they'll all pop up to 3200+ to get max loot, since everything is ridiculously expensive at BH6.

The ClashManiac game is progressing well.  We're running yet another new base design; an amalgam of several I've designed as well as some I've either come up against or seen online.  Where BH3 is clearly about pathing and open base designs work well, BH4 is truly a pain; no one base design seems to deliver it all.  Here's the current base design: 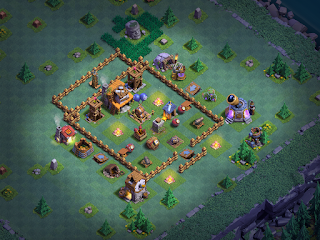 An attack from the top of the base will probably take the BH but it's a sucker's trap; it will be a low percentage one-star win.  The Hidden Tesla and Archer Towers will heavily damage whatever comes in that way and even if a player takes the walls down with a Bomber they'll have a lot to contend with getting through that line.  Air attacks will first have the towers beating on them then fall into reach of the air defenses as soon as they cross the BH.

Attacks from the bottom face the three cannons and some high HP items to keep them busy whilst they are pummeled.  Same goes for the sides.  Attackers coming in from the sides (or bottom) will hit a push trap as soon as they try to beat on the walls or enter through the opening.  These attacks will typically yield under 40% and no stars at all.

Of course, defense is no good without offense.  I've been working on getting my Sneaky Archers, Giants, and Beta Minions leveled up.  It's slow going; Barbarians and Sneaky Archers are up to level 6, Beta Minions and Giants are 4 with Giants moving up to 5 right now.  The barracks have been upgraded to include Baby Dragons but they're completely useless at level 1 and only marginally useful until they reach level 10 at BH5, so they'll be upgraded toward the end of the rounds.

On defensive structures, I upgraded the hidden Tesla to level 2, Air Bombs to level 2, Firecrackers to level 2, and both Archer Towers are now level 3.  The first order of business when we hit BH4 was offense - get the fourth Army Camp and upgrade the Star Laboratory.  I had to also get the Elixir Storage upgraded to hold the extra resources for these purchases/upgrades.  As always, I make a push to get everything on the new BH level evened up with things from the previous level.  In between the bigger upgrades, I grab a Push Trap, Spring Trap, or Mine to keep things moving along.  The Clock Tower nerf has rendered it largely pointless, so it is now at the bottom of the upgrade list.

The current trophy level for this game is 1218; that's a daily loot grab of 215K.  I need to get this game up into the 1600-1800 trophy range where BH4 performs best, although that's only a boost of 35K each day in loot, so I won't be kicking myself on this one for a bit.  Next movie marathon or TV show binge, I'll crack the games open and do some trophy pushing across the board.

The goal for week 3 is all about troops.  I need to max Giants and Sneaky Archers, followed by Beta Minions then Barbarians, Bombers, and Baby Dragons.  I'll finish off the Push Traps/Spring Traps/Mines and probably get a jump on point defenses.