BH8 is out and it's time to talk about base designs!

BH8 is new to the game, but many of the design concepts we’ve discussed in the past are stronger than ever now.  The three most prevalent - the strong hub, direction/misdirection, and zoned defense.

Most successful base designs on the Builder Base, simply use previous designs as a template.  They expand the breadth of he base, adding in additional defenses where they make most sense.  Eventually, they also incorporate whatever the current meta may be - this is usually a factor of trap/mine placement and settings.

Case in point - at the start of BH8, air is/was the dominant attack strategy (specifically, Minion Drops).  So...a lot of players have set their Mines and MegaMines to air mode!

There are only just so many layouts you can use, so precious layouts are usually modified.  This is especially the case at BH8 where the wall count is the same as it was at BH7.

Perhaps the most important aspect of a solid base design on the BB is the concept of a strong hub.  A well designed center-base will throw off many attackers.  This concept places high hitpoint structures strategically, around the outer edges of the hub, with the strongest defenses surround the Builder Hall itself.  Sometimes, one of the key defenses sits one layer beyond the core of the base; in those cases, you will typically find other defenses shoring up the weak side and/or traps and mines to catch unsuspecting attackers off guard.

The second most important concept here is that of controlling your attacker’s deployment strategy.  Many bases are designed to look easy on one side, essentially luring attackers to launch there only to find a massive array of defenses that decimate their troops as they pop off in all manner of undesirable directions.   This design is usually accompanied by an opposite side that has the bulk of defenses and buildings to slug through; by the time the attacker’s army reaches the BH, it just doesn’t have the oomph to get the job done.  It is possible to also use buildings of different hit points (some high, some low) to control pathing within the base.  This is direction/misdirection and some base designers are particularly good at combining this with careful placement of Mines/MegaMines for best effect.

Last, but far from least, is zoned defense.  Although this is not new at BH8 (and it is used particularly well on the Home Village), I think it is really coming into its own with all the added defenses we receive at BH8.  A base design is divided into multiple sections - usually 3 or 4 - then a defense strategy is mapped out for each, followed by a transition strategy that uses overlapping defenses to provide coverage against inbound troops.

I’ve spent the first couple days of BH8 working solely on base design, adapting my previous designs to the new level.  Some flopped, some are doing very well for me throughout the 4000s.  Smolson shared one of his own with us (I include it below and in the video companion to this article).  I also grabbed a couple from high level players that seem to have started making the rounds throughout the top 100.

Some of the best base designers in the game live in the top 100.  Although you don’t get to see where their hidden defenses lie (Hidden Tesla, Mines, MegaMines, Push Traps, Spring Traps) you can usually figure it out.  It is important to make adjustments to bases - to personalize them - so opponents don’t figure out how to beat your base before dropping their first troop.

At any rate...here are 6 base designs that I am currently using on my own games... 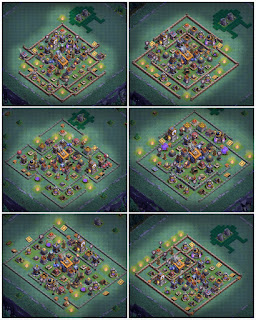 ...six others I've been tinkering with... 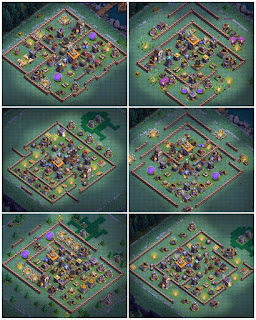 ...and the link to the companion video associated with this article!