I’ve been hearing of Mass Super PEKKA (MSP) armies wreaking havoc all over in the 4000s, so I decided to do some tinkering.

Take a look at these specs from the wiki (ClashOfClans.Wikia.Com).... 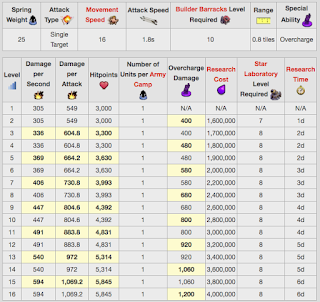 Her ability, the Overcharge, is a very modest 400 at level 2 but triples at level 16.

This troop is an absolute beast at level 16.

As I’ve mentioned elsewhere, I already have the Super PEKKA upgrading with all the loot I’m getting during Battlefest.  I finally have her up to level 8.  I tested her at level 4 - meh.  Level 6 - meh.  Level 8…well, I just got level 8 a short bit ago, so I need some time to play with that level before rendering a judgement but…not so impressed yet.

BUT…I *REALLY* wanted to see this troop in action - especially with all the talk of how it’s just tearing things up -  so I decided to use one of those magical blue potions to boost her to level 16.

All I can say is that this is absolutely, positively the most fun spam attack in the history of spam attacks.  Baby Dragons were ok; Beta Minions were reliable and highly functional; Night Witches were lots of fun; but the Super PEKKA is just an absolute blast.

Now, of course, no troop is perfect and the Super PEKKA is no different here.  Some problems I’ve noticed….

First and foremost - this troop likes to clump together, much like the Drop Ship.  Sometimes she seems to actively seek out her sisters in arms.

As such, the troop is highly susceptible to splash damage.  That means you really want to deploy them spread out and hold back on a couple to backfill as one goes down.  I tried a couple of mass drops - just putting all 6 in the same place - and it did NOT work out well.  That said, they also do massive damage when they run in pack.

The Guard Post troops can be an issue for the Super PEKKA as they draw her away from her intended path.  I’ve seen them follow Guard Post troops for several squares and, after destroying the troops, they pick up with their attack from that point leaving all kinds of things behind (not to mention getting pummeled by higher order defenses in the middle).

The Push Traps just throw these troops around like rag dolls.  You’ll see this in the replays but man oh man, do they go flyin’.  To be honest, I found this a little surprising as I really didn’t expect it anymore so than the Battle Machine being affected by Push Traps.  True, Spring Traps have no impact but Push Traps will definitely be a key defense against the MSP attack strategy.

Deployment of the Mass Super PEKKA attack strategy is very straightforward.  I either look for existing points of ingress in the base and use those, or I pick the facing side, preferably where I won’t get pummeled by a ranged defense like the MultiMortar (often not possible).  I try to spread them out a bit for maximum damage and I often hold back on the Battle Machine, giving them time to really soften the base up.  I don’t think you’ll want to keep the Battle Machine out until the end like we do with Minion Drops though, just wait until you’re a bit further in on the attack.  They work well together to take down defenses.  Unlike other attack strategies, there really wasn’t any one particular side that was better than another - if there was an area where junk buildings were grouped, I would usually pick there (maximum initial damage) but other than that, it really didn’t matter much.  No one defense really does more damage than another either.

The one thing I’ve definitely picked up on here - those bases where there’s a big, open space in the middle and walls around the outside…?  Yeah…those bases will be dead as soon as the Super PEKKA becomes a more commonly used troop, especially in the 3800-4500 trophy range.   MSP will absolutely rip through bases like that with mix-level defenses.

I am now absolutely on the wagon for the lethality of the GiBoCC and GiBoCCa attack strategies but I found that neither really worked well at higher play with L14 troops.  The strat really needs the additional units you get at L16.  Of course, I couldn’t test this because although the potion will boost troop LEVELS, it does not increase the number you get per camp (even though that is in fact part of the troop level on the BB).

So…there you have it, a first look at the Mass Super PEKKA attack strategy.  Lots and lots and LOTS of fun, this one.  I’ve included a video with some replays (linked below).