The Clashifer Hyper-Rush project began on March 16th with the singular goal of getting to BH8 as quickly as possible while building a viable Home Village game as well.

I just hit the one month marker on the game and it’s really come along nicely.

The HV is right about done with TH6 defenses, essentially making it a true TH7 here soon.  I could easily upgrade it to TH8, but I have a few other TH8s right now so I decided to hang out at TH7 a while and continue upgrading it.  I might just follow my usual rushing path of maxing on the odd numbered THs.  I played the game throughout the big Clan War anniversary event and it performed as one would expect of a TH7 in war...fended off attacks from TH6 players attacking up; held back the occasional TH7 player who couldn’t quite figure the war base out; and got throttled by a mid-level TH8.  😜 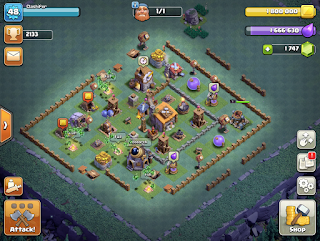 Of course, it’s the Builder Base we’re most interested in for this hyper-rush project.  In my last update, I had just pulled the trigger on the BH6 upgrade and L10 Beta Minions.  Turned out, I had Books of Building and Fighting, so I was able to finish the upgrades right away and get to work on BH6. That was April 5th.

As of April 16th, I have enough upgrades done to pull the trigger on BH7 and Beta Minions L12.  I expected to have to spend a solid 2 weeks at BH6, but it turned out not to be necessary.  I’ve steadily maintained trophies around 2100-2200 and that’s provided just enough resources to complete the Star Laboratory, resource storages, and Beta Minion upgrades.  As with previous levels, I really just upgraded the minimum required to get to the next level (BH7 in this case).  Defenses remain lower level (all but Double Cannons are level 1), as well as the Battle Machine which is only level 1. I’m still running around a 50:50 win:loss ratio and spending maybe 15 minutes a day getting in my loot wins.

I may need to put a little more effort into BH7 defenses, though.  Here at the end of my time at BH6, I’ve started to experience a bit of trouble defending; a LOT more 3-Star losses and ties.  There should be no doubt that the weak defenses are the cause there.

I’ve talked before about the Four Pillars of Clash - Offensive Capability, Defensive Capability, Attacking Skills, Base Design.  This game is quite capable with its Beta Minions, I am a fairly decent attacker, and my base design skills are pretty good as well.  A level 1 defense, though...that’s not optimal and it’s why I’m seeing so many 3-Star results from attackers.

The difference between a L1 BH6 and a L5+ BH6 is actually not as significant as you might think.  We may be talking as much as 600-800 trophies which only translates to about 100K in resources each day.  The question to be answered: will BH7 translate to enough of an advantage in mass to cover the 50% increase in upgrade costs?  If it does, then I’ll postpone defensive upgrades until BH8.

One of the goals of this project game is to show that you can rise through the BH levels as rapidly as you want.  This is essentially a level 1 defense, yet it is running over 000 trophies and progressing just fine.

I’m posting this update on April 17th, so that marks my BH7 start date.  The most recent Clan Games provided another Book of Building and Book of Fighting, so I will be able to jump straight into BH7.  Not too bad - zero to BH7 in just a month’s time, only buying level-up bonus packs.  Couple more weeks and we should see BH8...that’s when the REAL fun begins!