I've had a request for another update on the Clashifer hyper-rush project game, so the end of week 1 at BH8 seemed like a pretty good time to post an update.

Hidden Teslas, Guard Post, Archer Towers, Cannons, Double Cannons, Crushers, and FireCrackers are all at level 3 as of yesterday.  The Roaster, MultiMortar, and AirBombs are at level 2 as well (MegaTesla and Giant Cannon are already level 4, so there's nothing to do on those for a bit).  I even upgraded the Push Traps to level 2 along the way.  This exhausted the resources I had available as well as any that I won in the daily loot bonuses.

Speaking of raiding, L12 Mass Beta Minions is doing just fine so far.  I hit a bit of a losing streak after reaching 2954 trophies; I actually dropped down into the 2800s for a day, before recovering and ending at 2993 last night.  Right now, my Battle Log shows 3 losses and 7 wins, with most wins being from decent, 2-star attacks.  I'm hoping to break 3000 on my attacks today.

The competition around 3000 trophies has been wildly variable.  Just about everyone I see is a BH8, but that's where the similarities end.  Some players are rushing entirely too fast, ignoring their offense as well as their defense.  That style of rushing extends daily play time as it takes more attacks to get daily loot (which is why I'm not doing it).  I have not yet hit the point that my L12 Beta Minions lack the strength to seal the deal, and they will be level 13 tonight with level 14 soon to follow.  Getting them to level 16 will be a bit longer though; first, I have to upgrade the Elixir storages, then I have to get the Star Laboratory upgraded, all before I can run the upgrades.  That will take a little while to work through with the lower daily loot bonus.  (Maybe we'll get lucky and SuperCell will give us a Clan Games with the Rune of Builder Elixir....)

The upgrade plan hasn't really changed - secondary defenses are now on their way to level 4 (2 of 3 Cannons are done with the third a few hours into its upgrade), then I'll probably take the key defenses to level 3 before I start working on the storages.  While I work on the storages, I'll hit the non-critical structures - traps, mines, resource collectors, etc.  The Battle Machine is still level 1 and will be until at least L14 Beta Minions and L8 Elixir Storages.

I previously used walls as a place to dump Gold while upgrading storages.  This allowed me to take all of my walls to level 3.  Wall Rings were used to take several to level 4 and we get 7 more wall rings from the current Clan Games rewards, so I'll be upgrading 7 more in about a week.

Below is a pic of the current base layout.  This has served me well since reaching BH8 and I suspect I will continue using it for the better part of the next few weeks.  I have a few others that I'm tinkering with at the moment, so I will probably switch it up around 3500 trophies. 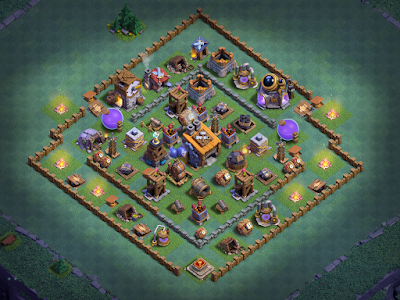 And finally, here is the actual upgrade schedule I've applied so far....

Be sure to catch the companion video to this article at the link below too.  Next update in about a week!