CoC BH8 - How To Beat This Base - Brackets Base

It’s the ever dreaded Brackets Base.  Now…there are a number of variations on this base - maybe the Roaster is here and the Giant Cannon there…maybe the AirBombs are over there and the MultiMortar over here - but in every case, the basic layout is similar to the same. 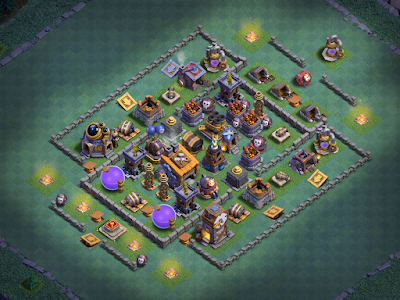 And it causes plenty of heartache for players all up and down the trophy rankings.

The Brackets Base really first came into its own at BH6.  Since then, it has been adapted to fit the new/additional defenses at each and every level to follow (BH7 and BH8).  The general layout has the BH at one end, surrounded by assorted defenses, bracketed no-man’s-land zones on either side, and fringe buildings on the other two sides.  Deployment from each of the four sides comes with its disadvantages and - depending on defensive strength vs the attacker’s offensive capabilities - it performs well against many attacks.

All that said…if you hit it at the right angle, you’ll take it down for a high percentage - maybe even a three star.

What attacks work well against this base?  Of course, the answer is the attack that you have maxed and are most competent with when attacking.

Big Bart (RB, BG, CC, Bomber), GiBoCC (BG, Bomber, CC), PEKKA Carts, Bart/BarCC/Carb - all work well against this base design.  Likewise, Minion Drops/Shimi, Mitch, and Drop Mitch/Shwimi will do well from the air.  You may need to adjust to the orientation of the base on the game grid, but there will be a version to fit every player’s arsenal.

The companion video to this article has 8 replays with all 7 of the above-mentioned attack strategies.  The base we go up against is a L7 defender with L8 key defenses and L4/L5 walls - exactly the kind of base you will see throughout the 4000s.  If you’re struggling to beat this meta base, give it a quick watch.  And if you have any suggestions for other meta bases you’d like to see, Drop me a line!