The Clashifer Hyper-Rush project turned BH8 on 5/1.  From a brand new game in mid-March, the final BH upgrade was completed just 45 days later.  The defenses are largely level 1 and the only money spent on the game has been to buy the level-up bonus packs that range in cost from $5-$20, providing a pre-built version of the strongest/new defense at each level (such as the MultiMortar, Roaster, Giant Cannon, and MegaTesla).  The Battle Machine is still level 1 and extra gold was typically thrown into walls or collectors along the way. 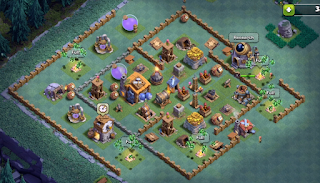 This is my favorite BH7 base layout and it's served me well through all of my Builder Base games.  Of course, I have a few favorite BH8 base layouts as well.  For an early BH8, I use this one.... 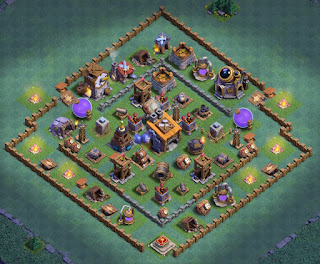 The upgrade path from this point will be different from what has been done on my previous games.  Normally, I would take all defenses to a level equal to 2 less than the BH before upgrading to the next level; for example, before going to BH6, I would make sure everything was at level 3, then at BH6 I would take it all to level 4 before making the jump to BH7, and so on.  In this case, though, I left the defenses at level 1 and focused strictly on getting to the top level BH (BH8).  As such, I have a whole bunch of super low cost upgrades I can do over the course of just a couple days.

It doesn’t make sense to focus in on the key defenses yet because these lower cost defensive upgrades will add far, far more wallop to my defenses than the high cost key defense upgrades.  Consider the Roaster - 1.2M gold to go to just level 2.  That 1.2M gold will take a LOT of other defenses to level 3 (maybe even level 4 in some cases).  As such, it just makes sense to upgrade the lower cost defenses first.

Although the game was updated on 5/1, I wanted to work on it a few days to establish the beginnings of the upgrade path.  I think it also shows how powerful the additional defenses and Army Camps are to overall player success.  I’m posting this article on 5/5 - just 4 days later - and the game is almost fully on a level 3 defense.  I’ve gone from 2536 trophies to 2954 trophies in that time as well.  Here’s the current upgrade plan….

As you can see from the image above I am on the L3 Crusher upgrades at this point.  From here, it’s simply a matter of bringing all, general defenses to level 4…

…and then working on getting the key defenses to level 4 as well….

Mines and Traps will be upgraded as filler, dependent primarily upon my schedule.  Although I’ll be setting alarms so I can sign in real quick to launch a new upgrade, there will be instances when the completion lines up poorly with my schedule; that’s where filler upgrades and gems come in handy.  Likewise, I will adjust the order to maximize sleep times (starting an 8 hour upgrade before bed rather than, say, a 5 hour upgrade).  Case in point - I upgraded to BH8 in the afternoon and completed L2 upgrades on all Cannons, Archer Towers, Double Cannons and 2 FireCrackers before starting a Crusher and calling it a night.  The next day, I just picked up where I left off with the FireCrackers.

As for how to use elixir...I’ve decided to upgrade the Star Laboratory and gem the timer.  Purchasing the bonus pack provided some gems, and I also have reward gems from both the Builder Base and the Home Village that I can use as well.  (I will pick up 1000 gems as soon as I hit 3000 trophies on the BB and that’s just a few days into BH8.)

The first question you might be wondering...can a totally F2P player do this?  The short answer is yes but with a caveat - it takes about a month longer.  All told, I’ve spent around $100 on this game - that’s BB and HV combined, roughly half and half.  The money spent on the BB side has been spent on level-up bonus packs which provide a key defense, some resources, and gems.  In other words...all time savers.  My earlier hyper-rush game (Phoenix Abyss) did not have the benefits of level-up bonus packs and has done just fine.

The next big question...can normal players do this?  I am a more advanced player, true, but remember - I simply spam my attacks on this game.  Unlike my primary game, I’m not putting much time into planning attacks or even changing out the army (I just use Mass Beta Minions all the time) and I have only a level 1 Battle Machine.  I am relying solely on the breadth and depth of the game to keep it afloat with the expectation that I will only see 50:50 win:loss ratios and a slower build rate due to lower trophy ranking (which means a lower loot bonus).

As to why would I do this...well...because it’s entertaining and that’s what games should be all about.  😎  I really do think the typical player would be better served with the more conservative upgrade path on his/her primary game (as I’ve discussed in the past), but this is certainly a good way to get an alt/mini to the endgame quickly and efficiently.

I’ll post additional updates on this game in the next few weeks and again at the 3 month marker.  Here’s the companion video to go with this article....