The Clashifer Hyper-Rush Project continues to progress very nicely.  This game was first launched in mid-March with the intention of getting the Builder Base to BH8 as quickly as possible.  Upgrades were focused strictly on what was needed to go to the next level of BH and one key troop (at first, Raged Barbarians and Sneaky Archers, then Beta Minions).  By week 3, I’d pulled the trigger on the BH6 upgrade; at the 30 day mark, I launched the BH7 upgrade.  On May 1st, just 45 days into the game’s progression, the BH8 upgrade was completed.

The game was a BH8, but it was a level 1 defender.  Over the course of the following two months, I have focused on upgrading the defenses.  Most key defenses (MultiMortar, Giant Cannon, Roaster; MegaTesla & AirBombs pending) have reached level 6 and secondary defenses are a mix of levels 4 and 5.  We’ve received a few Runes and Books that have been very helpful to the game’s rapid progression.  Purchases have been limited strictly to the level-up bonus packs.  Walls have been generally upgraded to L4, with Wall Rings used to cover the L3 -> L4 upgrade and Gold used for the other 2 levels.

On offense, Beta Minions were the primary offensive unit and upgraded at each level along the way.  They are currently level 16 and I began the upgrade trek for the Drop Ship.  It is now up to level 7 (level 8 upgrade underway) and part of regular attacking, usually as just one camp for tanking.  At level 10, I will move to using 2 camps, and I will test 3 camps at level 12 but likely hold off until level 14 before using 3/3 Minion Drops.  (It just depends on the meta at the time.)

The game is currently holding steady at around 3500 trophies.  It’s participation in Clan Games usually causes a small dip in trophies, but nothing unmanageable.  I’ve typically been attacking through upgrades but have reached the point it is no longer reasonable to do so; there are enough, stronger players in this trophy range that attacking with a major defense down is simply a waste of time and an exercise in utter frustration.  I now stack attacks until upgrades complete.  Other than that, and a few days off in the mountains, I hit every loot cycle available but I am not running the Clock Tower regularly.

The 3000-3500 trophy range sees a lot of attacks using Night Witches and, most recently, Super PEKKA.  Levels 14-16 of these troops are crushing to many rushed games around this trophy ranking.  I’ve made adjustments to my base designs to accommodate these attacks and it has helped somewhat but not entirely.  I need to strengthen key defenses and traps/mines to offset the offensive strength of these troops.

The Home Village was put into a standard rush and recently upgraded to TH8.  Everything has been dropped on the game grid, and upgrades are underway.  The recent TH12 release has convinced me to accelerate the upgrade schedule of this game’s HV and turn it into a feeder game.  The new focus for this game will be on storages and farming troops with the goal of reaching TH12 as quickly as possible. I will buy each level up bonus pack, drop everything new, upgrade storages and farming troops, then move on to the next TH level.  If I have any Builders idle in between upgrades, they will work on various defenses.  Books of Building/Everything will still typically go to the BB upgrades as they have greater impact there, however, I will likely use them to finish off TH upgrades as well.

Here are the current base designs and the BB upgrade log. 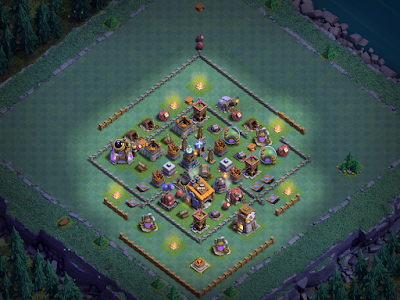 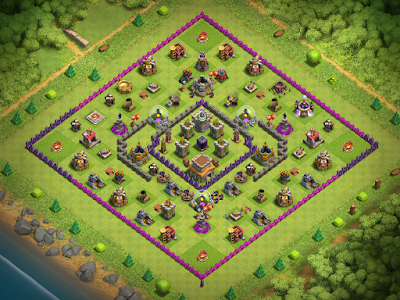