It’s been just about a week since my last update and much progress has been made.

We’ve had the benefits of a few events during the run of this latest, hyper-rush project.  The Hammer Jam event, though, has been one of the better boosts.  There have been some Runes released recently that allowed me to get a BUNCH more resources quickly and combining that with the half-length build times has been a major boon.  I took advantage of the announcements to finish off my resource storages earlier than planned so I could fill to max.

And the results have been great.  Everything was taken to L4, then key defenses were bumped to L5 (including the MegaTesla).  Right now, I have the last of them going to L5 (AirBombs).  I was able to get the Battle Machine to L5 and picked up its ability - having a L1 Battle Machine was definitely tough for attacks as he went down fast with no way to recover HP.  The Barracks was upgraded and I’ve unlocked Drop Ships, taking them just to L2 for now; that’s the lowest point where they can be used as a tank for Beta Minions on occasion.

I managed to break 3300 (3366 all time high) before falling back a bit as I ran attacks through upgrades.  However, I’m really having no problems staying over 3200, which provides 415K each day in Gold and Elixir; plenty to chug through these lower level/lower costing upgrades.

I had to switch out my base for a bit; the standard, low-level base I was running was no longer performing well.  This happens a lot in the game - certain base designs perform well with different levels of defenses at different levels of play.  After a while, I will have the required defensive upgrades in place to cycle it back into play when the current one starts suffering against stronger players.  Lather, rinse, repeat....

Generally speaking, daily play has not been bad.  I usually maintain 3/5 or 3/6 win ratios.  Every so often I hit a rough patch, though.  It’s particularly bad when I try playing through an upgrade, of course, so I sometimes stack attacks.  I have not trophy pushed at all here - you can see from the logs that trophy counts have remained fairly steady as I move through each set of upgrades.

Progress will start to slow again as the Hammer Jam event comes to a close and I have more expensive upgrades on the immediate horizon.  Still, this shows how far you can go in such a short time on the BB, especially with all the events and Clan Games rewards that are now available.  The only money spent on this game has been for level-up bonus packs; gems used went to finish off timers (not resources).  Spend averse, F2P players could do the same in just a couple months more.  More importantly, this shows the PvP gameplay remains relative;y healthy and balanced for newer players.

Here’s the current base and logs. 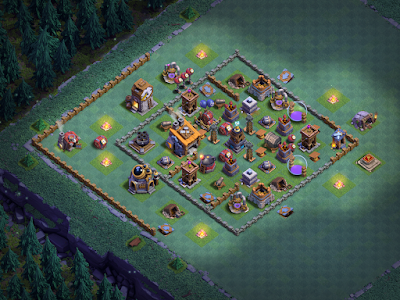