So...I slowed WAY down on this game in the month of July.  I brought it to a solid L5/L6 defender and got it up to around 3800 trophies (bounces between mid-3600s to 3800), but have focused most of my playing time on the HV as well as my other games in general.  I go in every so often now to clear collectors, run a few attacks, and start upgrades going but it will be backburnered in favor of my other games, becoming more something I work on during Clan Games (much like my other alts).

The initial focus of this game was to show how quickly one could go from new to functioning BH8 without spending a fortune and while maximizing just one attack strategy.  At first, I used RBs and SAs, but I quickly switched to Mass Beta Minions (BH4), which is my preferred strat.  Later, I added in Drop Ships.  As of right now, Drop Ships are L14 and should max by month’s end, even with my more casual play.

On the defensive front, I first brought everything to L4 starting with a focus on the key defenses (Roaster, GC, MM, AB) then secondary defenses like the HTs, Crushers, FCs, DCs, and finally tertiary defenses such as the Cannons, ATs, GP.  Traps and mines were something I would use to fill in when I was saving up resources for a larger upgrade.

After that, the focus was placed on key defenses to reach L6.  Secondary and tertiary defenses were brought to L5 and now I am bringing everything else to L5.  Those who have followed my threads on rushing know that I prefer to bring everything to not more than 2 levels below my current level before upgrading to the next. As such, the right time to upgrade to BH8 on a normal rush would be when everything on the board was at least L5 (2 under BH7’s levels). As soon as traps/mines reach that point, all that remains is to go on my regular rushing path - key to L8, secondary to L8, etc.

The Battle Machine (BM) has been out iff for some time.  I went to BH8 with a L1 BM, but realized I really needed to get the ability to compete effectively for resources, so I took it to L5.  Even at 3800 trophies, this is adequate to task.  My typical run of attacks requires no more than 15 minutes daily and even with Coan Games, I’ve had little to no problems maintaining an effective trophy ranking.  I experience the occasional losing streak, underdog matches, etc,  it no more so than any of my other games.  Of course, I gained access to greater resources more quickly by virtue of ascending in trophy rankings due to the faster deployment of buildings and levels.

Walls were - as always - low priority.  I did, however, want to get them to L4 to slow down the Bomber.  Wall Rings took care of that.  I used Gold on the first 3 levels, then switched to Wall Rings afterwards, focusing Gold on defenses.  We had a couple of big reward sessions on Clan Games that provided the necessary Wall Rings.  I even have some L5 walls in there now.  This helps slow down the ground attack quite a bit.

I’ve gone through several base designs and still change them fairly regularly.  Sometimes a base will be 3-started over and over - just the other day, my base was 3-starred 4 times in a row.  Most of the time, though, that is not the case and so long as I turn in a decent attack myself, I get through daily attacks in a reasonable amount of time (about 15m).

On the HV side of the game, it is nearing max-TH8 (a bit better than halfway there, minus walls) and does well when I occasionally take it into Clan Wars.

At this point, I think I’ll stop the regular journaling of the game’s progress as the original thesis has been addressed.  Of course, I’ll still answer any questions and anyone who is interested can always bring the game up to look in on it.  Long term, I will play on it periodically, likely maxing it before BH9 is released.  The defensive focus will remain on the key defenses, followed by secondary, then tertiary, and finally traps/mines.  I will come back to this thread in a few months with a formal update but that will likely be it until then.

Hope you found this helpful! 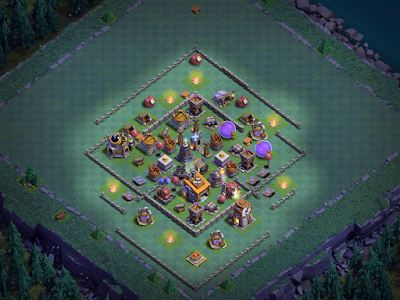