BH9 Base Layouts (Clash of Clans)

The ninth level of Clash of Clans Builder Base arrived with the summer 2019 update and BH9 brought with it the brand new Lava Launcher, a FIFTH FireCrackers, another Spring Trap, and another MegaMine, as well as OTTO.  That's 5 new structures and a whole new dynamic to your base layout.

I've had some time to tinker with base design at BH9 and although the same, basic principles are at play, it does have a few unique, design concepts.  I've assembled NINE (9) layouts for everyone below and provided links that will allow you to load them into your game straightaway courtesy of SuperCell's new "Base Deep Linking" feature that also came with this update.

The biggest change to the layouts would have to be the introduction of the Lava Launcher.  The Lava Launcher has a massive dead zone around it where it cannot target enemy troops.  If ever there was a periphery targeting defense, this one is it.  This defense reaches out to 10-20 tiles.  As such, you'll almost always want to put the Lava Launcher as close to the center of your base as possible.

The new meta at BH9 right now is very much all about air attacks.  Air defense gets a bump in the form of an additional FireCrackers and, potentially, another MegaMine.  You'll want to spread the FireCrackers out in such a way as to cover as much perimeter as possible with overlapping target zones.  Some designs will bring the FireCrackers in closer to create an air dome of sorts that can rapidly eliminate incoming enemy troops.  Of course, there are other air targeting defenses like the MegaTesla, Hidden Teslas, Roaster, AirBombs, and Archer Towers.  In most air attacks, you'll have tanks (Drop Ships) and heavy damage units (Beta Minions) although the Baby Dragon can provide both functions, and the Hog Glider will easily stun and destroy key defenses placed on the perimeter of the base.

Trap and mine placement will help with both gotcha damage as well as weakening troop advancement.  I like placing Push Traps in such a way as to drive troops into the Crushers and to trip Hidden Teslas early.  Spring Traps around corners and in the path of Boxer Giants will open gaps in tanking as well as slow damage.  MegaMines are the big gotcha defense - I put them in places where I expect masses of troops to appear, either on initial deployment or after an opponent believes the base has been weakened.  Regular Mines I use to soften attacking troops; they are especially useful for taking out 1 or 2 Bombers around outer layered umbrella walls.  Remember that Mines will usually push troops back a few tiles as well - this can push them into other defenses (like Crushers) but it can also be undesirable, tripping other traps/mines or even pushing them out of harm's way.

Each of the bases provided below has an initial layout of hidden defenses but you should consider changing them up a bit, or at the very least adapting them to the attacks you see as you use the base.  No base is perfect; they all need to be tweaked as the game progresses and are heavily dependent upon which defenses are upgraded to what levels at any point in time, not to mention where in the trophy rankings you're playing at the time.  I always keep at least three bases ready to go so I can switch if one is not doing well.

Some of the below bases are of my own design while others are adaptations of existing bases used among the top 50 players on the leaderboards.  I've had a chance to play most at one time or another this first day or so of BH9 and all seem to do well enough so far.  Be sure to watch the GwN video for a little more discussion of the bases as well.  The links provided below each base will allow you to download the base layout directly into your game, however, they only stay live for 28 days after the last time someone picked it.  If you find a link is no longer active, you'll need to build the base again the old fashioned way. 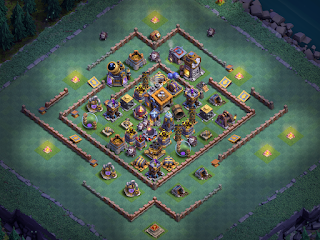 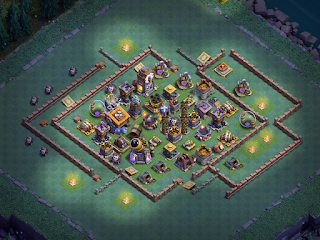 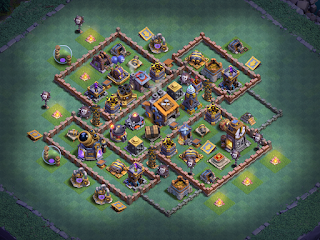 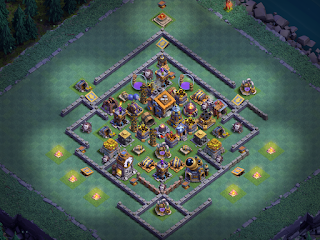 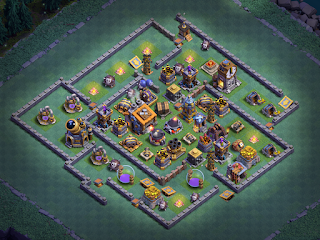 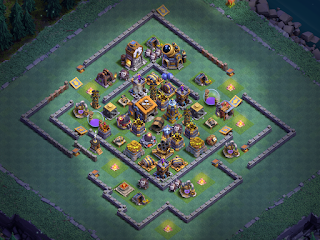 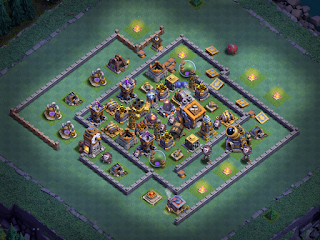 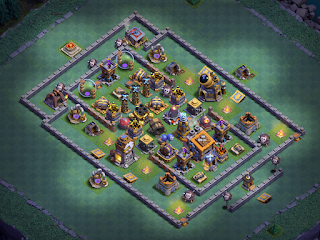 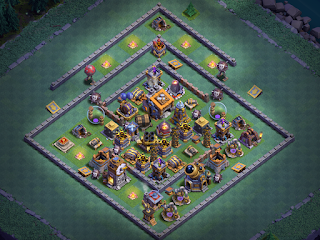