Last week, Pixonic announced a new feature for War Robots coming with the 5.3 update roughly mid-August; they call it the, "...Operation Pass".  Those of us who have been playing the game a while now know it as what is commonly referred to as a battle pass.


And I say it is about bloody time!

If ever there was a game that was ripe for the battle pass concept, it is War Robots.  For those unfamiliar with the way this works, a quick explanation.  A battle pass usually comes in two tiers - silver and gold (they sometimes have different names, but a rose by any other name...).

The silver tier is freely available to all players and offers lots of great rewards in the form of resources, skins, weapons, and so forth.  The gold tier costs some small amount of money each month and offers even better rewards as well as certain "gold pass exclusives".  In most cases, the pass really doesn't cost too much - $5-$30 a month, depending upon the game - and it is well worth the money if you are a diehard player.  War Robots' version will be $14.99/month.  Note that this is separate and additional to their existing premium service which offers 50% silver boosts, reduced upgrade times, and additional XP.   (BTW, the premium service subscriber will also get 50% more operations points, described below.)

The "official" YouTubers were given some footage showing the actual pass and the current rewards.  Naturally, someone on the forums pulled out their notebook and broke down the reward lines.  Although this is subject to change (and probably will), it offers a good look at where Pixonic is going with this feature.  Here's what they found in a nice, easy to read table....
First and foremost, let's look at the rewards on both tiers.

As you can see, the gold tier ("premium rewards" in this case) offers some pretty awesome items.  Players will be given daily tasks that are achievable through simple, everyday gameplay.  Complete the tasks and you are given operation points that allow you to progress along the ticker, getting rewards at each level.  Naturally, premium service players (separate from the Ops Pass, mind you) will get 50% more operation points along with the additional silver and reduced upgrade times we enjoy today.

Using this sample footage, the free tier still offers some great stuff that will very much help you get your game moving ahead without dropping one, thin dime.  Check out the composite.... 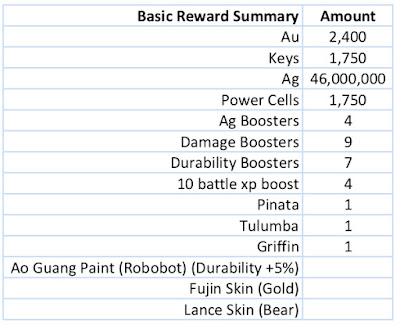 But, as you would suspect, the rewards are even better for those who fork out the bucks.... 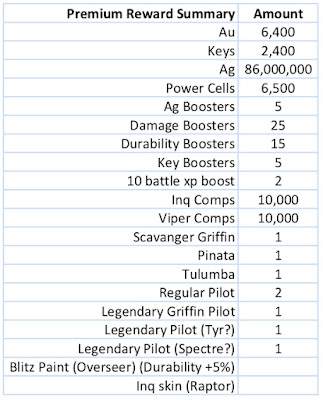 Keep in mind - all of this is preliminary; we don't have an actual deployment to look at, so the offerings and data in these tables will almost certainly change before it launches.  What's cool though is that we're talking about boosters, power cells, keys, gold, silver, robots, weapons, components, pilots, and the new legendary paint job/skins.

The new paint jobs/skins described in the sneak peek video are worthy of separate discussion.  First and foremost, Pixonic has said that all paint jobs will be available across robots.  So, if you got a paint job for one Ares, you can apply it to all of your Ares.  They're also introducing a new type of paint job that is not just cosmetic though!  As you can see above, the paint jobs for Ao Guang and Blitz include 5% boosts!  This is a definite departure and adds a lot of value.

As I mentioned, everyone gets the basic pass and rewards while premium pass rewards are only available if you pony up the fifteen bucks for the season.  Unlike other battle passes, though, a season of War Robots' Operation Pass will last TWO months so it's like spending $7.50 a month more.  Also, you can buy the Operation Pass at any time during the 2 month season and it will unlock all of the gold tier rewards you have operations points to access.  Either way, gold pass holders will get all of the rewards from BOTH tiers and that will mean a TON of forward progress.

Case in point - the dev sample showed upwards of 132 MILLION in silver.  Active players will typically generate 100M-300M in silver in any given month depending upon boosters and premium; this additional silver will jumpstart many a high cost upgrade.  I think this might be a nod toward moving silver generation to honor points and away from damage, something Pixonic has talked about before.


One down side is the dramatic reduction in boosters this seems to bring with it.  Much of the loss is filled through other means - the significant bump in free silver, durability/attack boosts in paint jobs, and so forth - but I do not think this really covers what we’re losing, especially when you consider the combined effect of boosters in squad play.  We’ll just have to wait and see how it works out.

The inclusion of legendary pilots is interesting as well.  They are ridiculously overpriced at 2500AU for a L1 pilot with a skill not terribly impressive.  Essentially giving them away is a curious business move and suggests Pixonic is doing well with promotion fees.

It’s hard to believe that Pixonic will be this generous, but this is the direction a lot of these games are going.  If this comes to pass as currently described in the review videos,it will be a substantial boost to any and all players willing to fork out $15 every two months for the “gold tier” and even more so to those who buy the existing premium service on top of the operation pass.  A whole lotta players will advance their equipment super fast with these kinds of perks, especially those with a backlog of robots and weapons to upgrade (which is most of us).  It will likely swell the upper ranks of the game (a positive thing) but also increase the level of play.

So...those are my thoughts on the new battle pass for War Robots.  Let me know what you think in comments or by e-mail.  Keep on blastin'!