Oh it’s the most wonderful time of the year…. 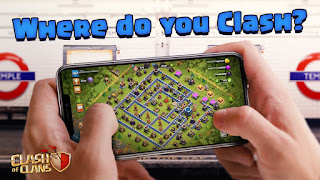 Now, as you can see, this shows someone playing their Clash of Clans.  BUT, if you zoom in… 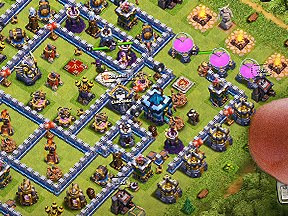 …you will see that it isn’t just ANY game of Clash of Clans, but rather one that has been partially upgraded to TH13!!!

This is pretty darn cool - it’s our first look at what the art geeks at SuperCell have put together for a new TH design!  Now, as always, this could be different by the time it formally releases, but it’s definitely pretty cool.  However, there’s more to this picture than meets the eye.  Look closely and you will see there are new hero levels and the Army Camps are no longer 5x5! 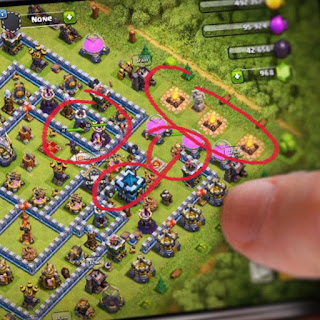 You can’t see the numbers so clearly here, but if you zoom it in your favorite photo editor, you can sharpen the image up a bit and we see level 70 for the Archer Queen and Barbarian King, as well as level 50 for the Grand Warden.

Perhaps the most telling thing in this image is that the Army Camps have been reduced from a 5x5 profile to a 4x4 profile.  And we know this to be the case because of the 2x2 statue in between the two camps.  Again - a pretty big deal.  Everyone knows that the game grid is too small to add anything new, so reducing the size of some of the structures means more space and probably something new added to the inventory.  (The rumor mill says there are other buildings reduced in size as well!)

We also know that the new month brings a new season pass and for that we get a new hero skin.  December’s is the “Jolly King” for the Barbarian King. 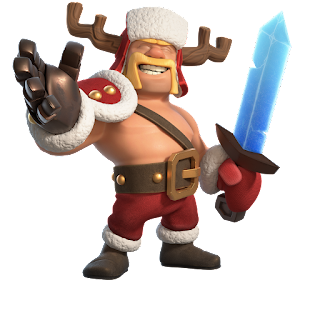 The big questions on everyone’s mind right now - what do we get with TH13 and when does it release?!?!?!

As with all TH upgrades, we can expect a new troop, maybe one or more new buildings (especially if they’re shrinking the profile of existing structures), new levels for most of the existing troops, new levels for most of the existing buildings, and most likely 50-100 walls ready to bump up to level 14.  Just thinking about the stronger defenses makes me anxious to try out the stronger troops.  A bunch of us have been debating for two months now about what the next TH level would mean for the GigaTesla - will it be made stronger vis-a-vis 5 new levels, will it be replaced with something altogether different?  Then we wonder about whether or not we’ll get a new defense, or maybe a new Army Camp.  And what about the Clan Castle - does it get a new level and, if so, does that mean a higher troop count?

The forums are rampant with speculation about the potential of a new hero as well.  We get the Barbarian King at TH7, then the Archer Queen at TH9, and finally the Grand Warden at TH11.  That’s 2 levels between the addition of heroes so TH13 is ripe for a new hero.  If we get a new hero, does that mean all 4 would be playable at the same time or would we have to choose a certain number of them like we do with Boom Beach?

There are SO many possibilities that it is hard to tell what may or may not be in there.  We’ve been waiting on the new dev build to play around with and that will be the real clincher.  Even then, there’s no telling for certain what makes the final cut - SuperCell has been known to release things to content creators that do not make it into the final, production release.  That’s tripped up a few of the leak machines over the years.

The next big question is when it will drop.  SuperCell likes to release updates around the middle of the month and I suspect this one will be no different.  They haven’t done the regular sneak peeks yet, so next week is clearly out of question.  The last week of December begins the winter holidays, Christmas, New Year’s…they won’t release then as they want at least a few days in the wild, just in case something needs to be fixed.  That leaves the weeks of the 9th and the 16th.  And since they usually release at the beginning of the week (again - so they have time for any quick fixes that might be needed), my bet would be the 9th/10th or the 16th/17th.

Of course, the timing is kind of a bummer for anything that happened in November - you’ll want to clear November’s Season Pass items before the end of the day Saturday, and get your Clan Games rewards this weekend as well, since they’ll expire before any release would come down.  However, I would be saving my medals from November’s CWL season and we SHOULD get one more season of CWL done before the update drops so you’ll want to hold on to those medals.

Also, remember we have a 1 week cool down on Magic Hammers, so get in there and buy any you intend to use NOW so you can buy a second one when the update drops!  If you’re not spend averse, I suggest picking up as many Books as you can as well - although you cannot stack magic items beyond the limits from events and such, any that you buy with real money DO stack.  So take advantage of those Black Friday and other specials SuperCell is sure to be running over the next few weeks. 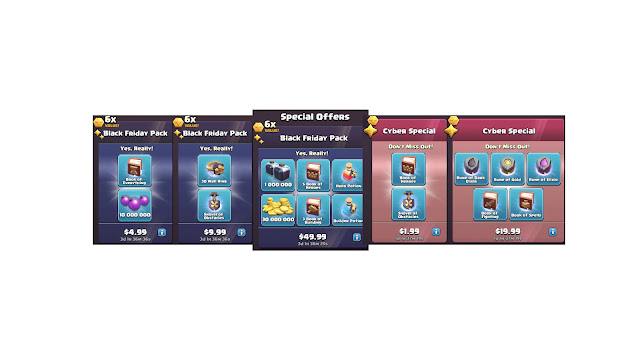 The big 50% off buildings and walls event is still going and that makes this an excellent time to get high ticket upgrades done.  For those who are near maxing, upgrading those Walls is an expensive proposition and this is an awesome time to knock a bunch out.  I’ve recently finished my main (fully maxed on both the home village and the builder base) but I’ve been hitting 35+ of my alts like a madman, upgrading things like X-Bows, Inferno Towers, and more.

This week, I’ll have the official sneak peeks which will include the formal reveals on new levels, buildings, balancing, QoL, and other changes.  We should also be hearing about the new, commemorative, holiday obstacle as well as the holiday troop(s).  Be sure to stay tuned and pop back through for sneak peek news as it comes available!

Now, just as an addendum...here are all the leaks I’ve heard about so far.  Nothing here is confirmed by SuperCell yet, so take it all with a grain of salt, but so far it’s pretty realistic.  We’ll just have to wait and see...!

Be sure to check out the latest video, as well as all the sneak peek videos this week, over on my YouTube channel - Gaming With Noc too!